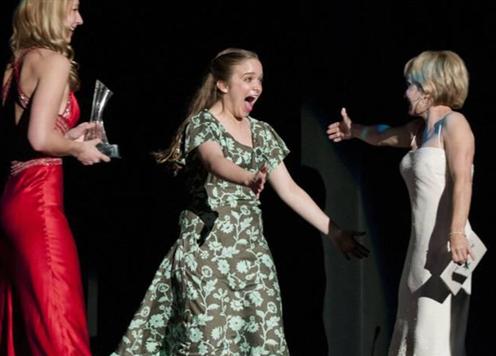 Emily started singing at a young age.  She has performed since the age of 6.  Emily’s passion for musical theatre led her to take part in many productions.  Her favorites include Crazy for You (Polly Baker), Les Mis (Eponine),  Peter Pan (Peter),  Into the Woods ( Witch).  Besides musicals Emily enjoyed her roles in August Osage County (Karen), Rivers and Ravines (Tess ).

In 2012, Emily was honored to have won the Dallas Summer Musicals High School Musical award for Best Actress for her role as Polly Baker in Crazy for You.  She traveled to New York to compete with the nation’s top 30 best actresses in a musical.  She performed in the Minskoff Theatre fulfilling a life long dream.

For the last seven years Emily has worked for Radio Disney doing voice over work.  She was also seen on the PBS Documentary Broadway or Bust.

Emily graduated from Oklahoma City University in May of 2016 with a BM in Music with Musical Theatre emphasis. Roles at OCU included Bat Boy           ( Meredith), Pirates of Penzance (Ruth), Nine (Louisa), Our Town the Opera.